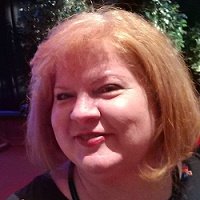 Helen Giallombardo has had a lifelong association with a variety of music performance groups all through K-12 public school and undergrad years at the University of Illinois, as well as church choirs, school bands, community-based musical theater (both cast and pit orchestra) and non-profit choruses in several states (Illinois, Ohio and Florida). Serving as chairman of the University of Illinois Concert Choir’s annual Singing Valentines campaign targeting funding for their European tour was her first true leadership experience in fundraising, with that project raising nearly $10,000 in two days with 4-5 quartets delivering to campus classrooms, private homes and businesses in Urbana and Champaign.

Upon joining her hometown Sweet Adelines chorus immediately following college, Helen was rapidly integrated into serving in administrative leadership of the non-profit chorus chapter Board of Directors, a 501(c)(3) designed affiliate of the Sweet Adelines International organization. In 1985, after meeting her future husband Jay (who was named to the Barbershop Harmony Society Hall of Fame in 2012 and awarded Lifetime Achievement in 2014), she moved to the Chicago suburban area and was tapped to help charter a brand new chorus, serving as President during the pre-charter phase up through its first appearance at a regional competition two months later where the chorus won First Place Small Chorus honors in the first year that became a distinction in rankings. Since then, Helen earned 5 international 1st place gold medals & several Top 5 international medals as an inner harmony part singer with the Melodeers Chorus, and she won regional quartet championships singing high harmony a total of 9 times.  For nearly 2 decades, Helen served in musical & administrative leadership roles, including overall rehearsal operations coordinator. During that time, Helen also served on the Regional management team in the role of Membership Development Coordinator and was Music Director for several small Sweet Adelines choruses in the Chicago area.

All while serving as Music Director of the annual musical at the middle school where their 3 children attended, Helen also launched the non-profit parents fundraising support arm of their daughters’ rhythmic gymnastics team and served as the Illinois State Meet event director, marshalling a pool of ~200 volunteers to run the 3-day meet. Her father-in-law Joe was the very first NCAA national champion, still holding the record for the most individual national wins, and Helen’s husband Jay was a trampoline champion before he became a barbershop chorus director and quartet champion. So, with their toddler grandson starting gymnastics training, the sport is a 4th-generation family tradition.

When Helen & Jay relocated to Florida in 2018, they brought with them their music publishing & services business that work with choral & orchestra groups all over the world as clients. Helen designed their database module system to track all business transactions, providing reporting for licensing and royalties to other publishers and marketing to their client base. She also enjoys recording the womens choral parts of the learning media made available to choral clients used to expedite music learning. They recently expanded their business which now represents 6 composer/arrangers writing mostly in the barbershop style. Upon settling in Jacksonville, FL, both Helen and Jay became hugely involved with the local barbershop non-profit choruses. Helen has served as President & Membership Coordinator on the Board of Directors of the Bridges of Harmony and has been integral in fundraising with creative project development and utilization of the Scrip system for revenue streams. Helen also sings with the Sound of Sunshine Chorus in Orlando. Most recently, Helen was appointed to serve as the Regional Rehearsal Liaison reporting to the Sweet Adelines International HQ Membership Director, in the role of guiding and advising all choruses in Coastal Harmony Region 9 to get “back to in-person rehearsal” in the wake of the pandemic.

In the course of attending mens and womens international barbershop conventions and gymnastics events in several countries, Helen loves to talk about having “driven either our own car or a rental vehicle in every major metropolis in the USA”! Her bucket list item is to visit the state capitols in all 50 states and she has only 7 states left to visit!

Helen is very excited about joining the Vavarde team of professionals to help organizations with all areas of fundraising and support services!